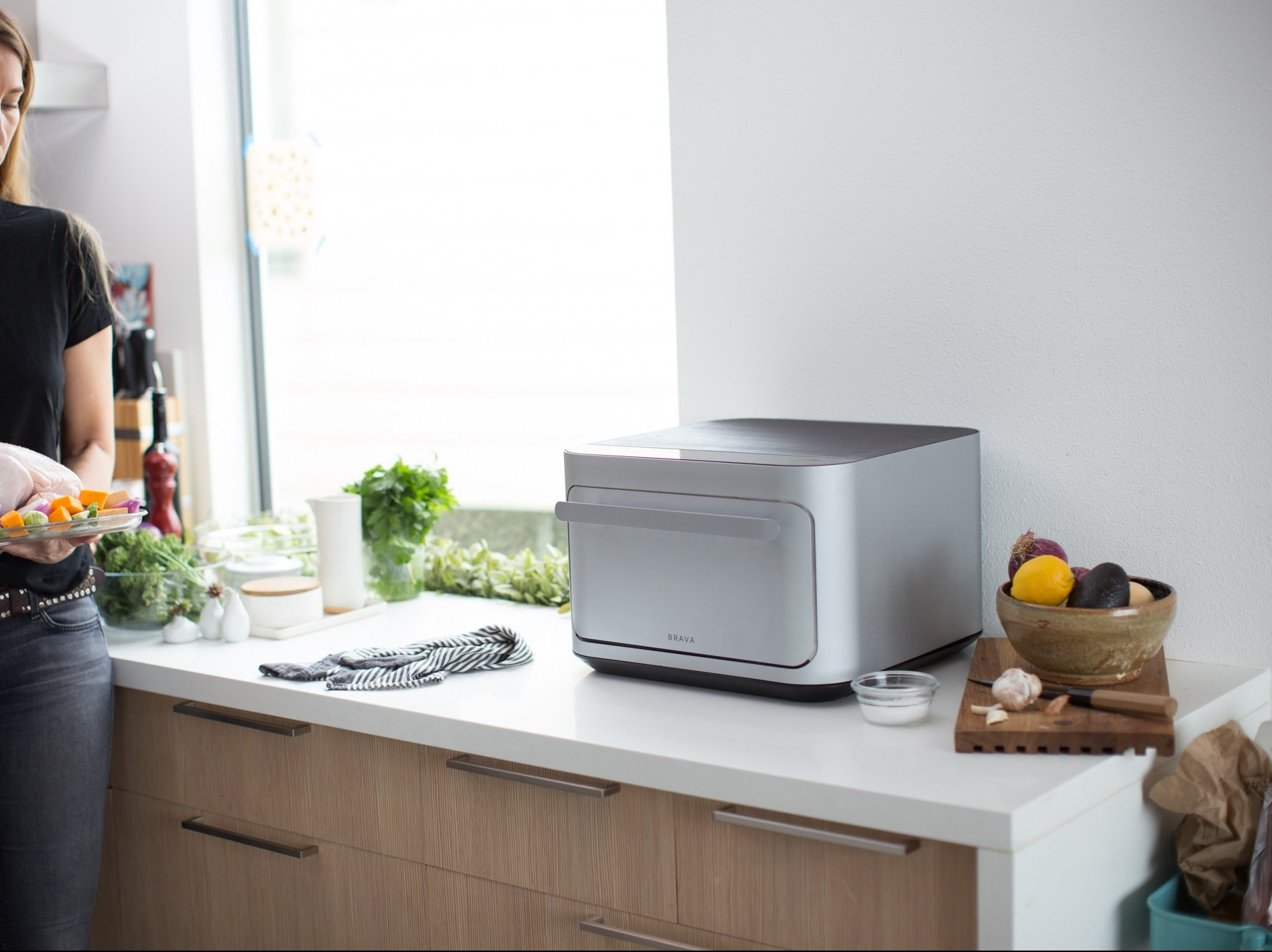 Cooking is the process of heating food to a desired temperature to change its internal and external properties. As the internal temperatures rise, proteins and fibers break down, fat renders, and starches degrade. At the surface, sugars and amino acids undergo a chemical reaction (also known as the Maillard reaction), which browns and caramelizes the surface, giving food rich and complex roasted flavor notes.

Heat can be transferred in three ways. With conduction, heat transfers from one solid to another via direct contact. For convection, heat is transferred via fluid transport (generally water or air). Lastly, with radiant, heat travels directly as a wave like the heat from the sun. Different methods of heating affect the cooking process in different ways. Conduction is good for searing proteins, while convection is optimal for baking because of consistently circulating heated air.

Brava is capable of all 3 forms of heat transfer, achieving conduction by pumping heat into the metal trays, convection by heating the air in the chamber, and most importantly radiant. Radiant heat has special properties separate from convection or conduction, in that it is the most easily focused and agile method of heat transfer. This critical differentiation allows Brava to cook multiple ingredients to different temperatures on the same tray and to heat up or cool down almost instantly.

How Can Brava Cook So Fast?

When you cook food, you apply heat to the surface which then diffuses into the middle. If you want to cook something as quickly as possible, you could apply as much heat as you possibly can, but that could burn the surface without properly cooking the interior. A smarter approach is to apply as much heat as possible to raise the surface temperature right to the point of burning, and then precisely pull back on the heat, continuing to apply only enough to maintain a surface temperature just below the burning point.

Conventional ovens don’t get hot enough to sear before overcooking the interior. A pan on a stovetop can get really hot, but can’t cool down or heat up quickly, meaning the chef has to manually maintain the surface temperature by constantly stirring or flipping. And because a pan transfers heat by conduction, it requires direct contact with the food, so irregularly shaped items like broccoli don’t heat evenly.

Brava’s unique direct energy transfer is capable of heating to the equivalent heat transfer rate of a 1400˚F oven almost instantly and returning to room temperature just as fast. This allows Brava to heat the surface of food to the optimal temperature incredibly fast, and then instantly pull back, which balances internal temperature climb with surface browning. Brava continues to pulse the food with energy, maintaining precise control over the surface temperature of the food to cook as quickly and accurately as possible.

How Does Brava Cook in Multiple Zones?

Because Brava primarily uses infrared, or radiant heat, Brava leverages the unique properties of light to give it special advantages over convection or conduction cooking. Like a spotlight, Brava uses independent light sources and custom reflectors to focus its energy on three distinct zones, so it can cook three different ingredients to different temperatures, at the same time. In order to avoid inconsistencies across full pan cooks, the spotlights are designed to have some overlap between zones.

Additionally, while the majority of the energy transfer is coming from the lamps, conduction and convection are still present and affecting the food. Because of this, there are some combinations of ingredients that are incompatible. For example, potatoes require a lot of energy to be cooked, while shrimp are delicate and easily overdone. Even if you never focus the energy directly on the shrimp in Zone 1, just the residual energy from cooking the potatoes in Zone 3 would be enough to overcook the shrimp.

How Do Brava Recipe Programs Work?

Brava Recipe Programs control when the lamps turn on, for how long, and at what intensity. The real magic happens when the Recipe Programs change in real time based on inputs from the temperature and particle sensors, guiding each cook to perfection. Additionally, tray type (glass vs. metal), and food height play a large role in how a recipe program is designed.

The metal tray conducts more efficiently than glass, so you use the metal if you are trying to sear everything on the tray, or the glass when you need more control of the heat from one zone to the next. Tray position affects the height of food that can be cooked, but also how it is cooked — the closer the food is to the lamp, the more exponentially powerful the lamp is.

Brava’s team of chefs carefully design each recipe program and optimize for each specific scenario. Zones filled also affects the recipe program — there is a unique recipe program for each zone filled for each ingredient. Chefs must account for food height, shape, density, quantity, and/or zones filled. Steaks less than 1-inch tall are so far away from the lamps that it is difficult to achieve a sear before overcooking the interior. For meats, applying as much energy as possible makes it easy to overshoot the correct doneness without giving the user enough time to plate, cut and eat.

Our chefs even factor in the color of the food as darker foods absorb energy more readily than lighter, more reflective foods. Brava’s chefs must factor in and compensate for all of these variables in order to adjust the cooks such that each ingredient is ready to come out at exactly the same time.

A close cousin of Brava’s lamps was invented decades ago for the semiconductor industry where a flash of light heats metal from room temperature to the brink of melting in under 3 seconds to rid the metal of internal stress defects. The advent of the modern solar industry helped to lower costs, allowing Brava to harness the core of that technology and adapt it for culinary use by combining it with advanced sensors.

A professional chef cooks with his or her five senses (sight, smell, taste, sound, touch) and thermometers. Brava has a camera, particulate sensors, a humidity sensor, and an array of seven thermometers to assess the condition of the food, air, and cooking chamber. Magic happens when we marry advanced algorithms with the sensors and fast-acting powerful heaters.

To produce consistently great results, Brava also utilizes environmental sensors to detect fluctuations in the home’s electrical supply. Power companies can make adjustments and neighborhoods can be impacted by differing electrical loads, but Brava automatically regulates the inflow to produce consistent results regardless of where you live. Brava can even detect brown out conditions that could ruin a meal. Brava even includes safety sensors, some of which are hard-wired into the electrical supply. These sensors provide safety nets on top of the strong algorithms built into the cooking system.

Cool, touchable exterior: Bava is designed to be safe for everyone in the family, including children. During normal cooking the exterior stays cool to the touch and the design includes special venting to reduce the exterior temperature during extended cooks.

Food safety: Unlike a microwave, which uses RF energy not commonly seen in nature, Brava’s light lies in the same spectral range as a campfire, which is why Brava has the same yellowish glow when cooking. Brava chose this spectrum because humans have been using the same form of energy for thousands of years, and its safety record is well understood. The difference with Brava is more power and electronic control with exacting precision. Furthermore, just like a campfire, it contains no UV, making it even safer than sunlight.

Fire safety: Brava was built with fire safety in mind from day one. Its lamps cannot turn on unless it is authorized with a physical button push. Sensors automatically and instantaneously cut off power when the door is opened. An inline thermal fuse cuts off power if the oven interior should ever reach unsafe temperatures. In the unlikely event of food catching fire, Brava is certified to contain and extinguish the fire by starving it of oxygen so that the fire cannot spread outside the cooking chamber.

Brava’s energy efficiency comes from its ability to precisely target the food items that need heating while minimizing heating of any other items that doesn’t need to get hot — such as the cooking chamber air, the kitchen, or in some instances, the tray. Conventional ovens and pans rely on preheating which for the most part ends up being dissipated into the room after cooking. It’s easy to convert electricity to heat with 100% efficiency, Brava’s magic is in its ability to direct the heat to exactly where we want.