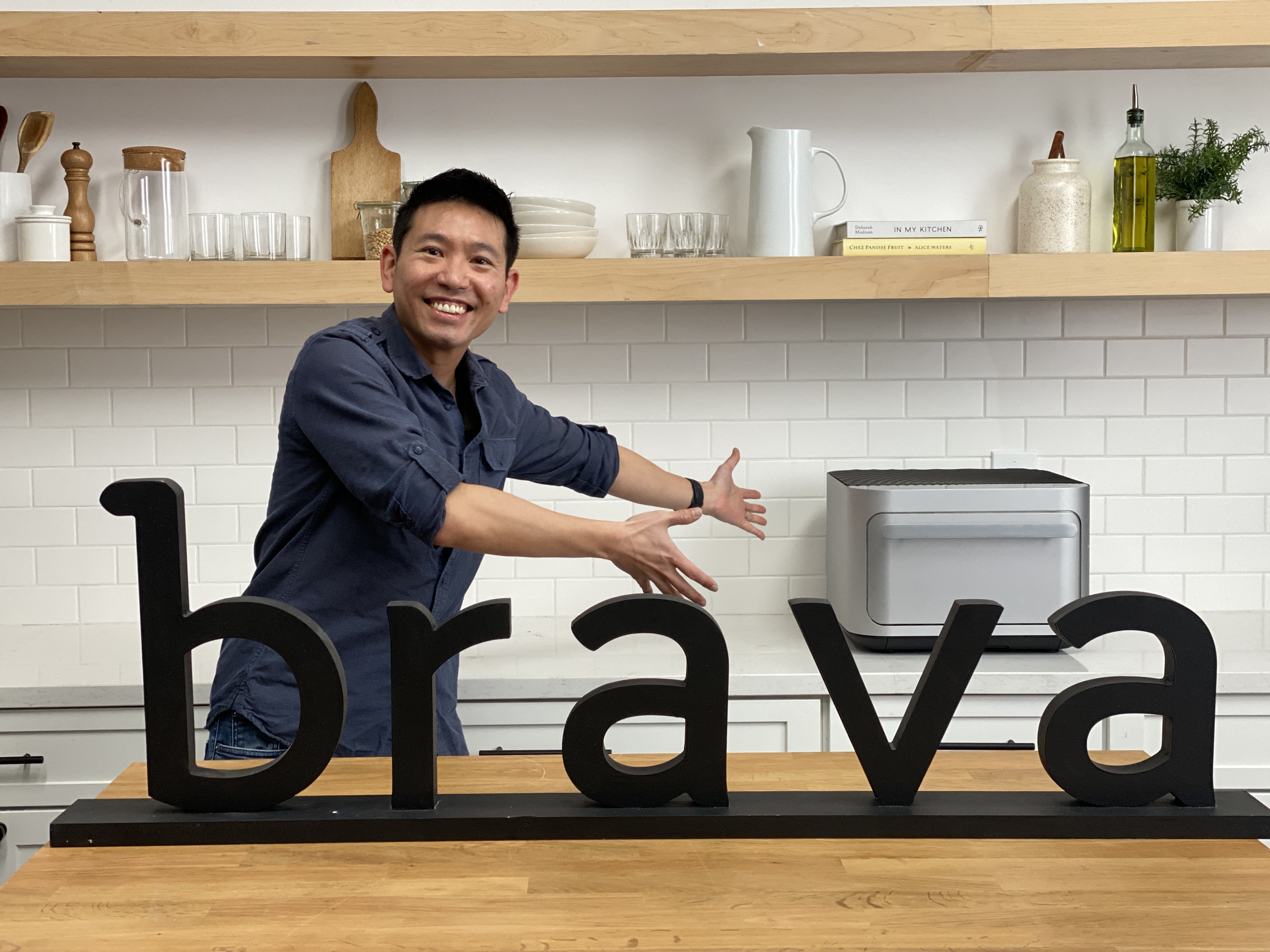 Why did you create Brava?

Because I’m a lazy person. I found most of the food automation systems to not fit my needs. Most of them require them to load the food in the morning and set some timer. When the time is done, let’s say 5pm…There are plenty of solutions that do that. The problem is my mornings are hectic. I don’t have time to load and set up equipment. I also don’t know when I’ll be home. I wanted a solution that I could take something from the fridge, shove it in, press a button, and  it be done. The problem is there was nothing out there that does that.

The microwave got pretty close. Honestly, it tastes terrible. I kinda hated the microwave. That’s one big inspiration for building Brava. The idea is originally inspired by my cofounder, Dan’s mom, who wanted to automate cooking. The breakthrough came when I actually used these custom lamps that I adopted from a silicon wafer processing machine. That’s a little oven that costs a million dollars each. They can melt spoons in about 5 seconds. They are very powerful. I built a prototype to have some fun. It turns out it tastes better and cooks faster.

How did you think that these lamps could be applied for food? How did that revelation come about?

I was always into the science of cooking. I read this book called The Modernist Cuisine. It’s a fairly famous book. I learned about Maillard Reaction and in a residential environment, it’s pretty hard to create the amount of heat flux necessary to do the right level of browning. We can cheat in different ways – i.e. use a cast iron pan to buffer up the heat (store up the heat and discharge the heat almost instantly when a cold piece of meat hits it). But that’s a limit of the heating mechanism. It’s because our stovetops are not powerful enough to sustain that level of heat. Therefore we have to store it in a piece of metal before we can put the food on and have it not lose its temperature. So that pointed me toward something ludicrously powerful. The silicon baking ovens came to mind. Melting metal in 5 seconds is certainly not something to scoff at. It’s also something interesting to try.

Why does food taste better cooked with light and achieves the caramelization.

It’s for several reasons. There are many ways to make it taste better as long as the heat is applied with 1) sufficient intensity and 2) not overdone. If it’s too much, it burns. When the heat is too little, it tends to overcook the interior before the surface is caramelized. A lot of Brava’s magic is the control. To be able to apply the intense heat but also the ability to withdraw it on command. That’s actually where most of the ovens fall short. With a very powerful broil someone may be able to come close to Brava what a Brava can do, but then they have to absolutely pull the food entirely out of the oven in time. Otherwise, just the residual heat from the oven chamber is enough to more than overcook the food. Whereas, Brava is much more resistant to that, because when the light turns off, there’s a lot less residual heat.

How does Brava work?

Brava works like an Easy Bake Oven for adults. Like a lightbulb. Or a laser. When Brava turns on, it applies heat directly to the surface of the food. Because of light, we can control to make it very even. We can also make it very uneven in the sense of the different zones. Just as a spotlight can illuminate different people. The other advantage it has is when the heat lamp turns off, the heat application more or less stops. It allows us to apply an intense amount of heat but also withdraw it in a matter of seconds. We have 3 zones and 6 lamps (top and bottom). That allows us to put the heat where it’s necessary – so there’s no flipping food. Once in a while, we need to – but it’s rare.

How long did it take to create – idea to prototype?

The idea kept changing. It wasn’t one idea and one prototype. It was the thought – “Oh, let’s automate some cooking.” That took several months before I arrived at cooking with light. I was actually thinking of cooking with radio waves and other things. At some point, I thought, “Oh! I want to cook with light and try it out.” So I started building specifications for these lamps, and I asked this factory in China to customize them. That process took 2-3 months. The prototype was a ball of high voltage wires exposed electronics on my kitchen island. It wasn’t very safe but it got the job done. It was sufficient to prove what the thing was capable of doing.

From proof of concept to the Brava people order?

How many prototypes did you develop?

15. The last 6 probably looked similar to the current product. It started out extremely different and eventually we settled on the form factor and upgraded it bit by bit.

What makes Brava worth its value?

For me, I have two kids. Brava can deliver a meal faster that I can go out and buy one. It’s drastically cheaper than going out to buy a meal in California, especially in the Bay Area. It’s more flexible especially with hungry kids who tend to not be able to endure their hunger for more than 30 minutes. For me, it’s absolutely worth it.

For different people — people who live alone probably love Multi-Zone. Other friends who have Brava, they make extreme gourmet food because of the level of control. Even if it’s cooking something totally random that we don’t have as a recipe. The fact that we can apply the heat so precisely, it’s very valuable for them.

What is your favorite thing to cook in Brava?

I had a favorites list, it grew so big, I had to scroll a lot. I’ve gone back to searching. Most often used recipe is Eggs, Fried. It’s so convenient. You crack the eggs in the little wells, fire the Brava, and forget it. I use that recipe almost every morning. I use it to cook lots of veggies and protein. Broccoli and Peppers — those would be second place. Followed by Chicken and some custom recipes I’ve made. I’ve made Hamachi Collar, some Japanese proteins, eel. Those dishes are extremely expensive at local Japanese restaurants. All I have to do is pull the protein out of the fridge and put it in the Brava.

Anything else you want to share – fun fact with customers?

The lamps are self cleaning. That was one of the things I was thinking about in the early days. The lamps are always squeaky clean. It’s an unintentional benefit of being able to deliver so much heat. Anything that gets on the lamp, being that it’s so close to the light, will turn to ash. There’s no need to wipe down the lamps.